Rochester Police Department’s Juvenile Division is bringing the national motivational speaker Ken Bartolo of There and Back to the city to kick off Red Ribbon Week 2019, the national honor for DEA Agent Enrique Camarena who lost his life in a drug raid. 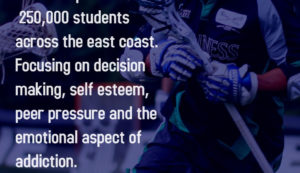 Rochester Police Department’s Juvenile Division is bringing the national motivational speaker, Ken Bartolo of There and Back, to Rochester to kick off Red Ribbon Week 2019, the national honor for DEA Agent Enrique Camarena that lost his life in a drug raid.

The Rochester Police Department is working with the Rochester School District to bring There and Back to our local athletes, their families and the community. There and Back, is the story of former professional athlete and collegiate football and lacrosse star Ken Bartolo. Ken shares the story of his 27 years of substance abuse, 3 years in state prison and the incredible story of his recovery. This presentation is an honest, authentic, and powerful look at the world of addiction and how it can destroy the lives of even the most promising of our youth. Ken’s message is meant to encourage today’s youth to believe that, with faith in themselves, anything is possible.

The presentations will be held Monday, October 21, 2019 at Spaulding High School at 9AM to the athletic student body; Rochester Middle School to the entire student body, and a parent session being held at the Rochester Opera House at 6:30PM. This is an opportunity for the community to see the connections between sports injuries, addiction and our youth and to help spread the national message of Red Ribbon Week about substance and alcohol use prevention.

For more details you can contact Nicole Rodler, Juvenile Division Coordinator, at the Rochester Police Department, at (603)330-7149 or nicole.rodler@rochesternh.net.

McGRAW — Ken Bartolo threw away 23 years of his life, ruined relationships, destroyed a career as a professional athlete and watched the world from the wrong side of prison bars.

He points to one bad decision — to take a hit from a joint when he was 15 — but that was followed by years of bad decisions and setbacks as an addict.

by The Staff of the Ridgewood

Ridgewood NJ, 2016-2017 Community Outreach Program Series Continues on November 16.The Curriculum, Instruction & Assessment Department is again offering free presentations for parents and guardians throughout the 2016-2017 school year on the topic of children’s well-being.

The 35th anniversary conference of the New York State Athletic Administrators’ Association is fast approaching and the conference planning team under President, Murphee Hayes, CAA, are working hard to bring our membership another first class conference program in keeping to the theme of “Every Child Deserves A Champion.” This is a very special year for the NYSAAA. Our current President, Murphee Hayes, CAA is the first female president in the 35 years since our first conference. It is also the 35th anniversary of our first conference for high school athletic administrators, held in Liverpool, NY in 1983. With that in mind, our association has some very special things planned for this special year. We’ve gone to great expense to bring in some outstanding national keynote speakers who will bring home the conference theme to all our attendees. We will also provide some very special gifts and events to commemorate this special year.

In the beginning of each school year at Rye High, there is a Drugs and Alcohol meeting held in the auditorium that all high school students attend. At this meeting, students listen to a different speaker each year who share his or her story about overcoming drug and alcohol addiction. This year, Ken Bartolo shared his story.

Ken Bartolo was once a star football and lacrosse athlete destined for the pros. Instead, he told an audience in the evening, October 25, and one of students earlier in the day at the Onteora Middle/High School auditorium, he suffered through 27 years of addiction.

Boiceville — Onteora Central School will present, “There and Back,” an informative and motivating presentation on drug and alcohol abuse, at 7 p.m. on October 25. The presentation will take place in Harry Simon Auditorium at the High School/ Middle School.