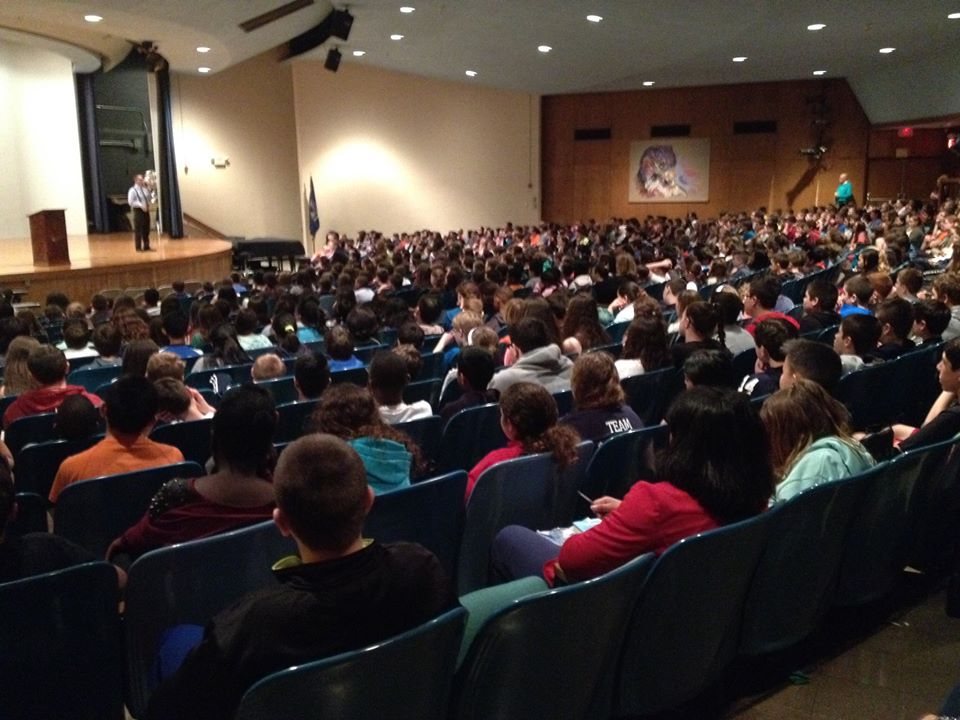 Ken Bartolo stands before athletes at Liverpool High School. As he raises the microphone, he notices the faces in front of him. He remembers sitting there 30 years ago, when his athletic career was limitless. But Bartolo’s future didn’t turn out as he thought it would at 16 years old. Drugs and alcohol took over his life, he was arrested 15 times, charged with four DWIs, served three years in a high-security prison and pronounced dead twice.

Now that Bartolo is getting his life back on track, he shares his story with students in the area to show how addiction can damage someone’s life. With the help of his support staff, Bartolo started the organization There and Back, a program he holds for student-athletes who are at risk for addiction. Bartolo has toured Central New York, the state and will soon take his presentation national with a trip to Delray, Fla. He plans to expand his presentation to rehabilitation facilities, prisons and youth camps.

As a kid watching Syracuse games, Bartolo knew he wanted to be a Division I athlete. As he watched players give interviews, he noticed those were people who mattered. But Bartolo became a drug addict before graduating from Jamesville-Dewitt High School in 1985. As a ninth-grader, Bartolo rushed for 1,500 yards at tailback on the junior varsity team. That same year he landed a spot on the varsity lacrosse squad. During his sophomore year he was being heavily recruited by Division I universities. Bartolo was already 6 feet tall and weighed 180 pounds. “I was talking to Joe Paterno at Penn State. I’m actually glad that one didn’t work out,” Bartolo joked.

In his sophomore lacrosse season, Bartolo broke his back. He was prescribed pain killers and became addicted. He also abused alcohol and experimented with marijuana throughout high school. By his senior year, all of his scholarship offers had been retracted and his grades were suffering severely. “I was as straight-laced as they come,” he said. “If you put me and a hundred kids in a room, I was the last one that you’d pick to become addicted to drugs.” Bartolo took his lacrosse career to Division III Nazareth College in Rochester. There, his drug addiction worsened. He struggled with cocaine, Oxycontin, Xanax, tranquilizers, crack and heroin.

Once his eligibility for lacrosse was up in 1989, he began playing football at St. John Fisher College. After completing his degree in 1991, Bartolo had one-year stint playing pro-lacrosse for the Rochester Greywolves. However, his life continued on a downward spiral. “I remember my mom telling me that every time the phone rang in the middle of the night she wondered if it was the police calling to say I was dead,” Bartolo said. Ken’s brother, Matt Bartolo, said having an older brother with addiction problems was tough on the whole family. “For the last 25 years it’s been a roller coaster,” Matt said. “I have two children, and it has been hard having him coming in and out of our lives.” Matt said that even now that he is enjoying the good times with his brother; it is in the back of his mind that Ken could screw up again. “You never forget everything that’s happened,” he said.

After a three-year stint in prison because of a DWI charge, he resolved to stay clean. “I remember the day like it was yesterday,” Bartolo said. “I was homeless on the streets of Syracuse. I was actually contemplating suicide.” During his stay at the Rescue Mission, he went into a bathroom and prayed for an hour. Bartolo then called a friend who had recovered from addiction and alcoholism. His friend brought him to an Alcoholics Anonymous meeting and from there he began his outpatient treatment. He started seeing a therapist, took a 12-step program and participated in spiritual practices.
Matt gave Ken the idea to start There and Back and his sponsor told him it would help with his recovery. “He’s really running with it to make it successful,” Matt said. “To see him take it this far is really impressive.”

Bartolo said it is difficult to relive his traumatic addiction. But, he tells people all the time, if they want to see why he does it, they should stand behind him as he gives his presentation. From center stage, he sees how he is impacting young people’s lives. “The whole point of the presentation is to get one kid to come forward,” Bartolo said. The advice Bartolo saves for the end of his presentation is encouraging those struggling to “ask for help.”

“That’s the most important sentence I’ve ever uttered in my entire life,” Bartolo said. “I was the last person to ask for help, but when I did, there were hundreds of people waiting to help me. They believed in me until I could believe in me.”